An Audience with Wayne Dobson and Friends 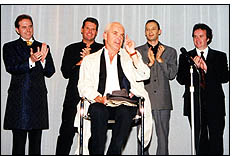 This show took place on the 10th & 11th October 2000 at The Magic Circle, an event in aid of Multiple Sclerosis.

The show opened with Wayne Dobson sitting on stage, introducing himself and making some brave and very funny jokes about his dehabilitating illness. He then did his version of Hoy’s Tossed Out Deck - an unusual presentation in that he names the three cards and then waits some time before getting the three assistants to sit down - building up the applause as he does it.

Noel Britten then took over as compere for the show. Noel is a regular performer at Comedy Clubs (as well as last year’s compere at Ron MacMillan’s International Convention). He is the type of performer - because of his engaging laugh and broad smile - who can get away with risqué material and freely insulting all and sundry. He combines visual gags (his ‘bending finger’ must be unique to him) with a few props: but these are only an adjunct to his throwaway jokes which are piled on top of each other with relentless force. No magic as such but something special, even as a comedian.

First act on was Richard McDougall with his cigarette miming piece to music and his ‘single white female’ goose. Both are inimitable pieces and superbly acted out. Duncan Trillo followed with thimbles, Professor’s Nightmare, Diminishing Cards, Linking Rings and Dancing Handkerchief. One of Duncan’s major strengths is how well the magic fits in with the music. The simplicity of the tricks he does is remarkably deceptive; it is an act that magicians, as well as laypeople of course, love to watch.

Russ Stevens, a recent lecturer at The Magic Circle, demonstrated why his card routine to a song from Sting, is the most popular part of his entire show, Illusions included. He followed it up with his Card Sword routine. In Richard, Duncan and Russ you had, in my admittedly biased view, three of the best silent magicians in this country on the same bill.

Wayne then returned to do his main spot of the evening - his borrowed note routine, combined with his vent with two spectators. In the middle he performed a card trick that seemed to go wrong but was then ‘saved’ at the end when he performed his Sam Shovel character (along with several groaning puns!) who produced the chosen card from a newspaper. Wayne, despite his handicap, was in cracking and relaxed form, demonstrating why he reached the very top of our profession.

I was informed that the night before had been busier and therefore the atmosphere was more sparkling. But even with the slightly disappointing turnout it was undoubtedly another top show at The Magic Circle. Both David Berglas and Michael Bailey - present and past Presidents - were in attendance: in the Clubroom afterwards, Michael Bailey said that a portrait of Wayne’s A Kind Of Magic show would be hung up in the building.

As well as the Technical Crew (Neil Martin - also Producer; Chris Banks, Roy Marsh, Gordon Drayson) there was close-up from John Gordon and Michael Vincent. Being a cynical magician I, of course, did not watch much of that. But I did catch John Gordon’s borrowed ring and shoelace routine which was excellent.