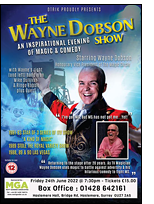 As Wayne explained in the opening of this unique show, he had decided to hang up his mic for the public after doing a highly successful show in front of 1500 people in Denver, Colorado nearly 20 years ago. He’d assumed that lay audiences would not take to a paralysed magician with impaired speech performing in a wheelchair; he’d preferred to go out on a high.

As it did for so many, lockdown provided an about-turn in his thinking, and he performed a couple of low-key guest slots in shows for the public - and was taken aback by the encouraging response he received. So he resolved to try out a couple of full evening shows, to test whether there was, in his words, "Still an audience for a weird act like me to bob up now and again. And it will be fun finding out either way: I’ve no longer anything to lose, just the joy of performing my favourite material for people who have come out to be entertained".

He got his answer on this June evening, when an audience of mostly laypeople bought tickets for a new "Wayne Dobson Show" at Haslemere Hall, a quaint, intimate theatre. On the night it was over half-full, which was most reassuring and produced a warm, welcoming atmosphere for the intimate show.

Opening with a series of filmed vox-pops with good luck messages from friends such as Joe Pasquale, Brian Conley, Dynamo and Derren Brown, this segued into a film that briefly but movingly charted Wayne’s career and personal life at the hands of Multiple Sclerosis. When the screen fell to reveal Wayne onstage in his chair, the welcome he received was both emotional and genuine.

Inevitably the audience members were agog to see how his speaking voice, impaired by his condition, would hold up. Thanks to a decent mic and sound system, they need not have worried; although impaired, his voice came through loud and clear, and the show was away.

But what about the elephant in the room: how a paralysed former star would perform magic? Sat onstage with his trusty sidekick, a slightly menacing-looking Mike Sullivan, by his side he introduced the show with a brief, personal but defiant speech about his condition and why he was doing the show. From there it was into the action: his improvement on the classic ‘Tossed Deck’, in which the spectator could first examine and shuffle the cards. This was his "Ultimate Tossed Deck". Then he invited a spectator onstage, with whom he did a book test ("Economicon" by Al Smith, since you’re asking) before moving into his new version of his marketed comedy routine "Sexted".

To give Wayne a brief break, the animatronic model of Ringo Rabbit, who’d appeared on Wayne’s television series, bantered awhile before becoming the stooge in a "Mastermind" TV quiz sketch ‘he’ had performed on that same series. Then it was back to Wayne, with Mike acting as his hands, for a stage version of "The Magic Square". To close the first half we were treated to guest pro Matt Daniel-Baker with his brand of light-hearted mentalism. Matt returned to open the second half, before Wayne got a spectator up onstage for the sponge ball routine he’d done at the 1989 Royal Variety Performance, but without Wayne’s trademark "Voices" bit; as he said himself, "those days are gone".

He did his extended ‘Do as I do’ card routine "Echo", complete with comic byplay and sight gags, to a great reception. Following a T&R Newspaper gag with Mike, the pair presented a charming story deck routine to a ‘Sam Spade’ voice-over, to great acclaim; this was Wayne’s "An Englishman In New York", to a backdrop of his Sam Shovel character from the TV series.

Wayne is well aware of the tightrope he is figuratively walking with a show like this; rather than highlighting his condition to seek amazement that he was even doing it at all, he preferred it that people appreciate it as a magic show, not a tragic show. In this he largely succeeded, and the magic routines certainly worked a treat, as did many of the comedy elements.

In fairness it was inevitable there were some glitches, and some technical and timing niggles, but for the first time for 20 years in public, he must try not to beat himself up too much. The essence of the show worked, better I’m sure than could have hoped; the audience were most appreciative, patient and sweet, with many well-wishers coming backstage afterwards to chat, catch up and just express their love for what he’d done; several said they’d found the show immensely moving.

So will Wayne do it again? He answered at the close of the show: "As long as I’m able to put on a show like this, and there are lovely people like you to come and watch me, I’ll keep doing this." Good for him; here’s to the next one.

Additional thoughts. Wayne commented afterwards: "So how did it go, performing for the public for the first time in 20 years? On the whole the magic routines worked really well, as did most of the comedy elements. But of course I’m alive to the fact that they were moved by the fact of me performing gamely in a wheelchair; several laypeople said to me after the show how moving they had found the show. In one sense that’s very sweet, but in another it slightly frustrates me as I want the show to be well received on its own merits; it’s a magic show, not a tragic show.

In fairness it was inevitable there were some glitches, and some niggling technical and timing issues, but it’s been two decades, so I try not to beat myself too much over that. And these are things that are easily fixed; my mind’s already buzzing with some changes I want to make. But the essence of the show worked, better than I could have hoped. And most importantly of all, physically and mentally I felt fine throughout.

The theatre was over half-full, mostly of the public rather than magicians, and the audience was most appreciative, patient and sweet. A load of well-wishers came backstage afterwards to say hello, chat, catch up and just express their love for what I’d done.

I closed the show by saying to that warm audience, 'As long as I’m able to put on a show like this, and there are lovely people like you to come and watch me, I’ll keep doing this.' And I meant every word of it."