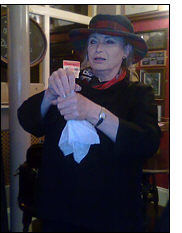 The 1st Tuesday of October proved to be a wet and blustery night, with some interpretation to how many would brave the weather. So come 7pm (the official start) we only had 2 magicians and 6 customers!

However, as the evening dried out the group swelled to a mass of practising magicians, guests, customers and curious passer bys.

Lee Hathaway stunned everybody with his ‘aces’ shuffling and managed to eat his way through several packs of cards, fortunately Ed Francis had a few in his ‘stall’ at a very reasonable £2.50 a pack to replace them.

Joe Stone, fresh from appearing at the last ‘night of illusion’ did a lot of new close-up work much to everyone’s pleasure.

Whilst Mark Chudley, Steve Dela and others from the Zodiac and Watford clubs respectively exchanged tricks both with the public and to each others amusement.

The night was topped off by a privileged visit from Fay Presto (photo) who arrived on her scooter and soon had everyone in raptures with her floating £10 note and burning ‘serviette corner’ treats amongst others. (Luckily the doors were open and the smoke detectors weren’t triggered).

Ed managed to attract a lot of magicians and is already planning the next one!

The evening finished at 11.30pm with the obligatory regurgitated cards strewn all over the pub floor.

Next Free event is scheduled for the 1st Tuesday of the month, 3rd November, so come one and all.