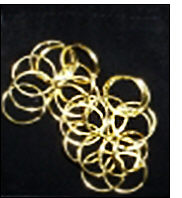 The idea will be familiar to most magicians of a certain age and any number of magicians of a not-so-ancient persuasion. The prop is a set of rings linked together in a way I don’t really know how to describe, the effect is that an individual link travels from the top of the link, apparently linking and unlinking as it does so. It’s an interesting and puzzling and very visual. And best of all, it works itself. In fact, if you want to dent your reputation, you can allow a spectator to have a go.

The Merlins addition, which the spectator won’t be able to manage, is to apparently and completely remove the link from the bottom of the chain and discard it. And to repeat the effect as often as desired. To magicians it’s a bit obvious, to say the least. There are shades of the Miser’s Dream principle (perhaps that’s where they got the name from). It reminded me of the Repeat Banana Trick, or whatever it’s called.

Anyway, obvious or not, when it was demonstrated to me I thought it looked good and had potential. I’ve since tried it in walkaround (as suggested by Merlins) and it went well.

I don’t think the chain is actually gold(!) but at a glance it looks it and together with the attractive velvet carry-bag, the package adds up to an elegant little outfit. Easy to carry, easy to do.

A neat spin on a golden oldie, which is almost, but not quite, a pun. Worth checking out.