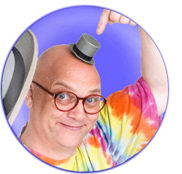 On a very hot and humid Wednesday evening and after a few announcements about the success of last week's Day of Magic, we settled down to watch Steve Dimmer's lecture entitled "The Nuts and Bolts of Children's Entertaining and other Magical Perils".

The first thing you can't help but notice is the stage set up and just how much Steve's props, back drops and of course Steve himself fill the "performance space" making the set up for the show very engaging, before the magic has even begun.

Steve talks about filling the performance space with back drops etc. to maximise the potential for re-bookings; when the other parents look trough the photographs they will see a fully staged show, that's big and bright etc.

Steve also gives brilliant insights into how to handle naughty children and talkative groups ups! One piece of advice that actually made laugh out loud was the advice given regarding a letter a child gives to a talking grown up. "I'll say no more about it, but it's great".


Also, briefly discussed, the advantages of going on a "story telling course" which myself and other members found very useful.

Mixed in with the great advice Steve also performed some excellent road-tested magic tricks, one using a drawer box entitled Dinosaur Extinction, involving lots of audience participation and shouting out! One thing I thought that was great about Steve's magic show, was that the presentation was very modern including televisions or other things children know and are very keen to engage with, for example Disney, Thomas the Tank Engine, Hello Kitty and even Doctor Who.


My personal favourite piece of magic Steve performed used Lego pieces put in a bag and shaken up and after some magic words they were all stacked together! A very visual piece of magic. Also performed were tricks that played big - but could be made up for just a few pounds.

Steve also gave a very short and easy sales pitch regarding his items for sale, all of which were very reasonably priced.

I feel I speak on behalf of "everybody" at my society when I say Steve's lecture is highly recommended, and if you're just starting out in children's magic (like me), or you're a seasoned pro, you will not fail to learn at least one new piece of advice.

[For more information about Steve Dimmer's lecture, and to book, visit the Magic Lecturers page]