Devised and Produced by Andrew O'Connor
Reviewed by MagicWeek

"It is mind control, but I let people come to their own conclusions about what is really happening. You just develop a feel for people from doing it for so long, then you try to create a psychological environment where things can happen." Derren Brown 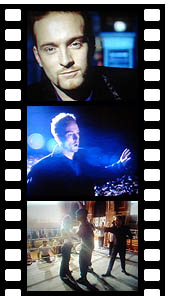 Mind manipulator Derren Brown's first venture into television, in the shape of a one hour special for Channel 4, was ground-breaking stuff. "These are not magic tricks - this is mind control" proclaimed Derren in the opening seconds, or, in other words, "let's get one thing straight right now..." - a very shrewd move. Then, by exposing a simple 'TV magic trick,' (the type that can't stand up to the press of a video rewind button) Derren clearly established right from the start that this wasn't a 'magic trick' show. The biggest hurdle for any show of this type - overcome in seconds. He'd also now won the audience's trust by being so 'frank' with them - clever stuff.

Derren performs in an easy, yet authoritative, style with enough flashes of charm to prevent things getting heavy. The format of the show was as fresh as Derren's presentation. No contrived studio sets here, it was very much an out-and-about affair, with a 'spontaneous' feel throughout. It had the pace of David Blaine's first special, but in no way imitated. In places it felt 'live.' Locations varied widely. From the start, when he visited a group of young offenders in Prison, to the end and a sequence in an Art Gallery.

Something that has always been difficult when producing this sort of material is to convey to the television audience at home the atmosphere that the people surrounding the performer are experiencing, as it happens. Well they managed this too, often by working with hand held cameras, and also by steering clear of a rigid script.

I'm not going to describe what he did, that would be like listing the props in a play, and that's not what this is all about. Let's just say if you saw it you'll know - and if you didn't then you'll enjoy it all the more when you do. Plus it's more fun that way.

At last, here is a performer capable of actually causing a hardened television audience to really question "the whole deal".

This was the finest 'magic of the mind' type production that I have ever seen. Derren Brown has mastered his craft, and deserves every future success. Excellent.