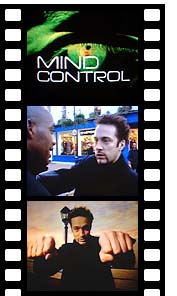 Star Wars fans (and this will make no sense if you're not) must have taken great delight when Derren uttered the wonderful line "This is the dog you're looking for" as in Ben Obi-Wan Kenobi's "These aren't the Droids you're looking for." Whether or not this was intentional I don't know but it worked for me and it worked for Ben in evading the clutches of the evil Empire, and it certainly worked for Derren at the Walthamstow Greyhound Stadium - turning losing betting slips into winning betting slips at the pay-out counter with his "mind control."

Show number three already, and it was only a year ago that we saw the first. The format was much the same as its predecessors, tightly paced (perhaps too tight in places - I wanted a little more time to see Derren's pleasure in "getting it right"), slickly edited, moody, and highly inventive.

The show opened in London's Carnaby Street and proceeded to jump from location to location, each time presenting a different aspect of "mind control." This format is so much fresher than a typical studio setting and also means that nearly everything that the viewer sees is perceived as being "spontaneous." For me magicians "pre-show" and "off camera" arguments don't really come into it. You might as well take advantage of the medium that you're working in. When I hear magicians argue "but you can't do 'such and such' live" I feel, to be frank, that they don't quite get it. The opposite is also true. There are things that you can do live that don't work on Television - it's a two way thing. Causing an audience to think that something "is" when in reality it "isn't" is what magicians and mind-readers are supposed to do... it's their job!! And back to pre show - try performing your linking rings without a little "pre-show" work on one of them!

When I reviewed Derren's shows before I didn't want to "list tricks" and I don't really want to this time. Suffice to say that clearly a lot of thought went into the construction of these routines - and nearly all resulted in very good television.

The entire production team should be really proud of completing a third show in what traditionally has been viewed as the hardest form of "magic" to make truly entertaining. Hopefully we will see Derren take to the stage later on this year. His live close-up work is stunning and it will be very interesting to see how he develops this into a full-blown theatre presentation.